The involvement of the British Colony of Kenya in the Second World War (in Swahili: Vita Kuu ya Pili ya Dunia) began with the declaration of war on Nazi Germany by the British Empire in September 1939. Though minimal fighting occurred in Kenya itself, it remained an important economic asset for the Allies and also contributed a significant number of soldiers to fight in the British Army.

During the war, Kenya was one of the single most important recruiting grounds for the British Army in Africa. During the course of the war, 98,240 Kenyans were recruited as Askaris into the King's African Rifles (KAR), representing 30% of the unit's total strength. 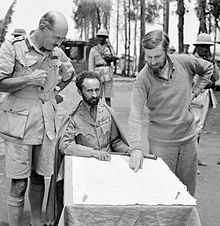 Emperor Haile Sellasie and British C.O.s after the fall of Damacha.

The vast majority of soldiers from Kenya, of whom most were volunteers, were overwhelmingly black, however the policy of racial segregation in the British Army meant that they were commanded by white officers and NCOs. Blacks were not able to rise above the rank of Warrant Officer. Kenyan soldiers served in the successful East African Campaign against the Italians, as well as the invasion of Vichy-held Madagascar and the Burma Campaign against the Japanese, alongside troops from west Africa. Kenyans also served in the Royal Navy and some individuals also served in the Royal Air Force.

Nigel Gray Leakey, a white NCO from Kenya in the King's African Rifles, was posthumously awarded the Victoria Cross for bravery in East Africa.

In 1942, the entire British Eastern Fleet transferred to Kilindini near Mombasa in Kenya, after its existing base at Colombo in Ceylon became threatened by the Japanese. The Far East Combined Bureau, an outpost of the British codebreaking centre at Bletchley Park, was also moved to a former school in Kilindini in 1942, where it worked on deciphering Japanese naval codes.

Kenya also gave its name to a British cruiser which served during the war, although it did not directly contribute to its crew.

The economic mobilization of Kenya during the war led to an unprecedented level of urbanization in the country, swelling the population of Mombasa and Nairobi by as much as 50%.

Kenyan soldiers returning home after the war were much less likely to accept to degrees of racism which had existed in the country before the war. Returning Kenyan soldiers also found themselves competing with Indian migrants for scarce jobs, and little better off than before the war .